Saved at the age of 18 and at the same time he received God’s call on his life. He has been faithfully serving the Lord since then. Prior to coming to the U.S. he was the director of Manila Bible Institute and was one of the pioneers of the Pentecostal Holiness Church in the Philippines.
He and his wife, Rosana and their three sons migrated to San Jose, California in 1991. He planted the first Filipino Pentecostal Holiness Church in 1992 and became the founding pastor. God put in his heart to plant and daughter churches all over the U.S.A. 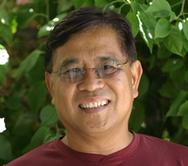